Superior organization was key to the Cosmos' opening goal against Atlanta

Sloppy play was a regular feature on Sunday, and the Cosmos took advantage of that in scoring their opener

Share All sharing options for: Superior organization was key to the Cosmos' opening goal against Atlanta

The Cosmos didn't take long to establish a lead on Sunday, scoring from a set piece in the 23rd minute. Mads Stokkelien was fouled right on the edge of the box, but what looked on replay like it should have been a penalty was awarded just a foot outside the area instead. In the end, it didn't matter, as Carlos Mendes slammed home the rebound from Marcos Senna's free kick anyway.

Here we have the Marcos Senna lining up to strike the ball. We've got a four-man Atlanta wall with a Cosmos' player in front of the group and another on the shoulder of the last man. Two other Cosmos players appear to be man-marked on the far post, and Diomar Diaz has a man keeping tabs on him as well. There's also an eighth Atlanta outfield player in the box, though it's not clear who he's marking: 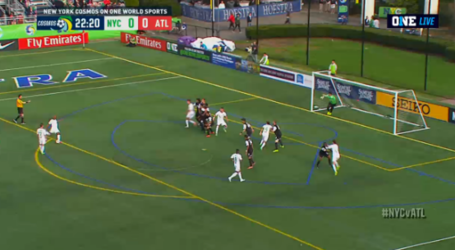 Next up, we see Atlanta goalkeeper Derby Castillo managing to get a hand to Senna's free kick. It was a well struck ball, and honestly, Castillo was lucky to keep it out of the net even after getting to it. Meanwhile, seven of the eight Silverbacks' players are doing nothing but watching the ball, while the one defender who decided to track his man has done a terrible job of it: 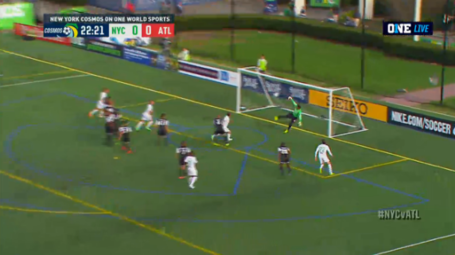 Finally, here's Carlos Mendes slamming home his first of two goals on the night. He happened to be in the right place to knock the rebound home, but as you can see, Atlanta was in trouble unless Castillo managed to push the ball out of play. Any ball that dropped in the 6-yard box would have been met by an unmarked Cosmos' player. 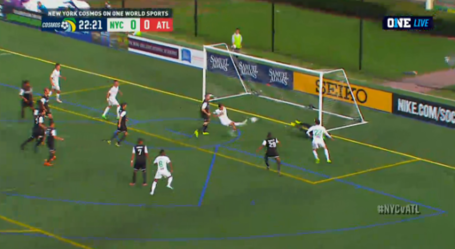 The Cosmos' spacing and timing were outstanding on this play, and they certainly deserved their opening goal. It didn't hurt that the Silverbacks defending would be judged as atrocious by U12 standards, but I suppose that's the price you pay for having a head coach that only works with his players occasionally.

Everyone expects a bit of sloppy play in the first few games of the season, but on Sunday, you have to give the Cosmos' staff credit. They had their side looking organized from set pieces even when it took some time to get things rolling from open play, and largely because of that, they won comfortably in the Soccer Bowl rematch.

More From Twice a Cosmo